The world just can't get enough of the amazing, amazing Danny MacAskill. Back in September, we featured the incredible cyclist, and today he's been written up in the New York Times. 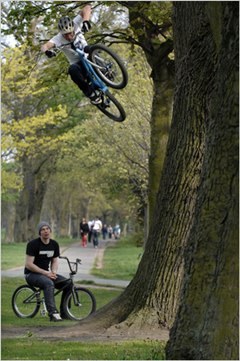 "MacAskill's attitude is simple: it's all about preparation, confidence and positive thinking.

'Picturing anything negative will make something bad happen,' he said. 'You have to be relaxed. Whether it's 10 feet or 1,000 feet from the ground, I do not plan to fall.'

But positive thinking goes only so far. MacAskill broke his collarbone in a fall as he turned a corner during a visit to San Diego in October. That was days after he terrified friends by clowning around on his bike on a lookout by the Hoover Dam.

Over the years, he has torn ligaments in his ankles, dislocated fingers, broken his right wrist and been a fixture in X-ray rooms around Britain."

Despite his injury, MacAskill's positive thinking (and daredevil nature) prevails. His skills continue to astound.

Check out his latest big ad campaign for Volkswagen, released this past October.

Want to master Microsoft Excel and take your work-from-home job prospects to the next level? Jump-start your career with our Premium A-to-Z Microsoft Excel Training Bundle from the new Gadget Hacks Shop and get lifetime access to more than 40 hours of Basic to Advanced instruction on functions, formula, tools, and more.

Other worthwhile deals to check out: